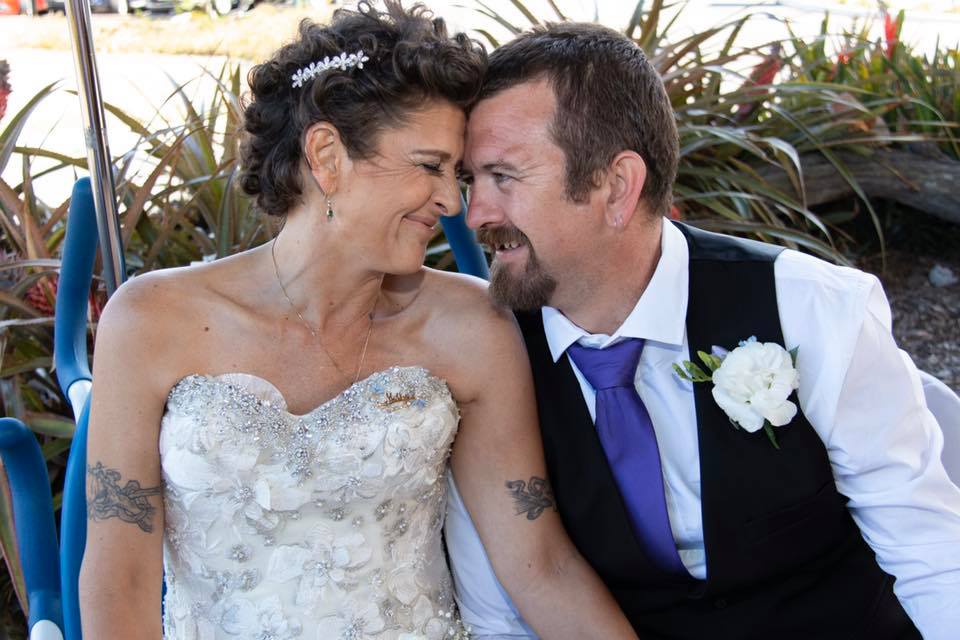 Tracey and Rob were friends for a long time before their friendship shifted and they became an item.

When Tracey was first diagnosed with oestrogen positive breast cancer, she was determined fight it.

Tracey celebrated and Rob celebrated being cancer free and they planned for their future.

Sadly, only one month later, Tracey was diagnosed with Triple negative breast cancer in the same breast. This form of breast cancer is much more aggressive, and Tracey prepared to fight again. She was eager to try new trials, and she was the friendly face in the treatment room helping soothe the fear of new patients and shining like a light for everyone.

A wedding was always on the plan for Rob and Tracey, but it just never happened. As soon as the couple saved up enough money for a celebration, it would need to be spent on treatments or new trials (having cancer is expensive!). After battling the cancer demon for over ten years, they didn’t think it would ever happen.

A friend contacted the local radio station in Maryborough, Queensland, who contacted My Wedding Wish. Funnily enough, the Social Worker at the hospital also contacted us, and within only a few hours, Tracey and Rob’s application for a gifted wedding was approved by the Board.

CEO, Dr Lynette Maguire jumped into action and soon we found Christie Schilling from The Prop People who was well established in the wedding community with an impressive network – Christie was happy to not only build the wedding, but to be the on-the-day co-ordinator. A huge relief when we find generous souls like this in new territory!

The wedding was set for Thursday, 7th November 2019 (Tracey’s son’s birthday). An impressive list of vendors grew, and Tracey was blown away by the generosity of the Maryborough and Hervey Bay wedding community. At the same time, our Head Office received a donation of 12 brand new wedding gowns, and the gown Tracey ultimately picked was beautiful and absolutely perfect with no alterations needed. A true dream Princess dress!

Everything was moving along nicely, and the excitement was building. Guests were receiving their invitations in the mail and posting the excitement about the long-awaited wedding. Tracey and Rob would finally marry!

Then a phone call changed everything. Tracey was not well and back into palliative care, and it was suggested that we pull the wedding forward. As a patient in Hervey Bay Hospital, the Chapel there seemed like the best idea. A new date, time and venue was chosen: 23 October 2019 at 1pm.

This though caused a few obstacles. The one-month legal requirement had not been met, and Tracey, unable to drive due to her illness, didn’t have a driver’s licence and we were waiting on her 18+ identification card to come in the mail. We had a day and a half to make this happen, because her face dropped with sadness when she was told it may not be a legal wedding. Tracey’s dying wish really was to marry her life’s love.

Step in marriage celebrant, Nerissa Pace, who worked her magic and in less than five hours the Shortening of Time was granted. The wedding was on.

There was barely a dry eye in the Hervey Bay hospital chapel, because as you can imagine, it was quite emotionally charged especially when Tracey was wheeled in to Beautiful Crazy by Luke Combs. Tracey looked absolutely stunning from head to toe having been pampered Jodi and Monique her hair and makeup artists.

The ceremony was short, sweet as Tracey with fluid on her lungs, was having problems breathing and speaking and was tiring quickly. Celebrant, Nerissa included this reading from Disney’s Winnie the Pooh:

“If ever there is tomorrow when we’re not together… there is something you must always remember: You are braver than you believe, stronger than you seem, and smarter than you think. But the most important thing is, even if we’re apart … I’ll always be with you”.

Rob wrote and read his own vows which were very moving and the couple’s family and friends were all involved in the ceremony. Tracey was particularly moved when her Oncologist dropped in to the chapel to congratulate them. Afterwards, the family shared their beautiful wedding cake and champagne to celebrate.

Take a moment to listen to this beautiful thank you message from Melinda Scheltens, Social Worker, Oncology and Palliative Care, Hervey Bay Hospital.

After battling two different breast cancers for over a decade, Tracey passed on 28th October 2019. 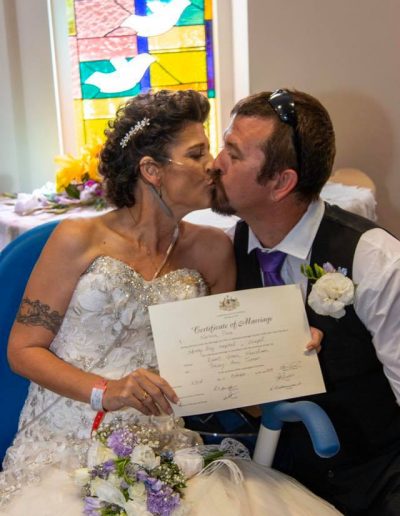 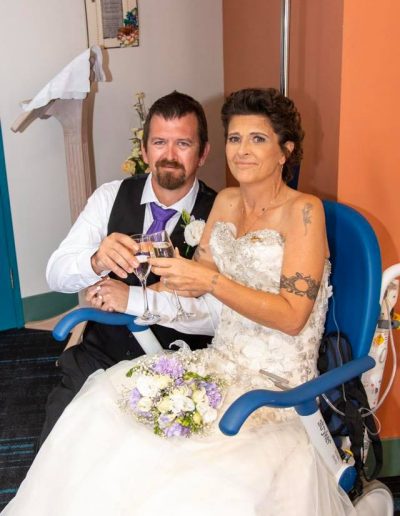 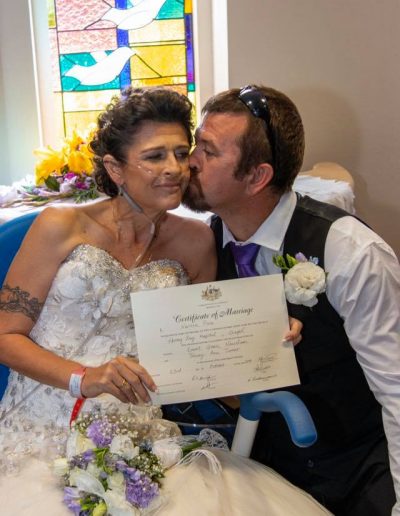 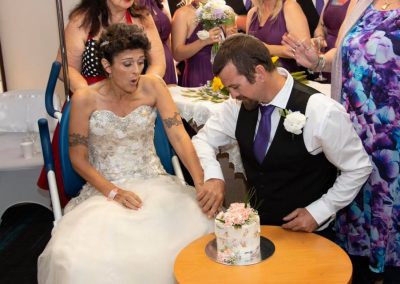 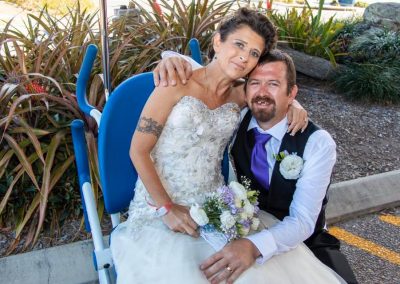 We would like to acknowledge the following Suppliers who generously offered to donate their services for the original wedding date but could not accommodate the rescheduled wedding date when Tracey became unwell and returned to palliative care: