Brendan and Mia (sadly the wedding did not take place) 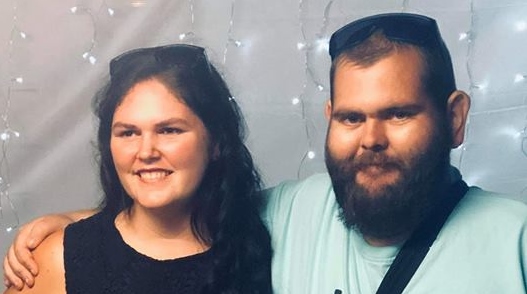 Brendan and Mia met on the internet; Mia was a single mum to Nikita at the time. The couple chatted for 3 months prior to meeting in person and then hung out for a bit and soon found themselves talking and spending more and more time together. Nikita enjoyed spending time with Brendan, and they all loved doing fun things together.

As time went on, they decided to take things to the next level and become a family, and about 4 months after they moved in together, they found out Mia was pregnant. The couple weren’t quite sure how to deal with this being such a new family, but they managed and welcomed their beautiful son, Levi on the 21 of September 2016. The couple agree that this new addition changed their lives in the best way possible.

Mia and Brendan have a lot in common: they’re both family orientated and both love fishing and camping, anything outdoors and have always shared a close relationship with Mia grateful for Brendan’s beautiful relationship with Nikita.

In February 2018 Brendan got quiet sick and the couple weren’t sure what was going on. Doctors ran tests and scans and Brendan was transferred to the Royal Brisbane Hospital where they met a specialist who was testing for blood cancer. After going back and forth a few times Brendan finally got his results back: he didn’t have blood cancer, but rather gastric stomach cancer and that he had a tumour in his stomach. Brendan was diagnosed with Stage IV cancer and was terminal.

Mia says, “That day turned our lives upside down. Brendan was told he could never return to the job he loved. We were told that he would live for maybe only 6 months – it was scary! We had no idea what to do or how to tell the kids.”

Family watched Nikita and Levi while Brendan and Mia attended appointments and treatments and the couple tried to manage every day living to keep things as normal as possible. In October 2018 Brendan was transferred to Northlakes clinic to be closer as travel was becoming increasing difficult after chemotherapy.

At Christmas 2018, Brendan wanted a break from treatment and wanted to go away and spend time with his family. The family really enjoyed spending close time together and Brendan felt well. Sadly, in January 2019 Brendan become quite ill again which ended with him back at the Royal Brisbane for six weeks.

The wedding that never was:

In May, 2019 the couple approached My Wedding Wish – they’d started to plan their wedding at the Powerboat Club in Caloundra on 3rd August 2019. The application was approved, and their dream team was pulled together

Unexpectedly, Brendan passed on 15th May, 2019 never getting to marry his life’s love.

We would like to acknowledge the following Suppliers who generously offered to donate their services: